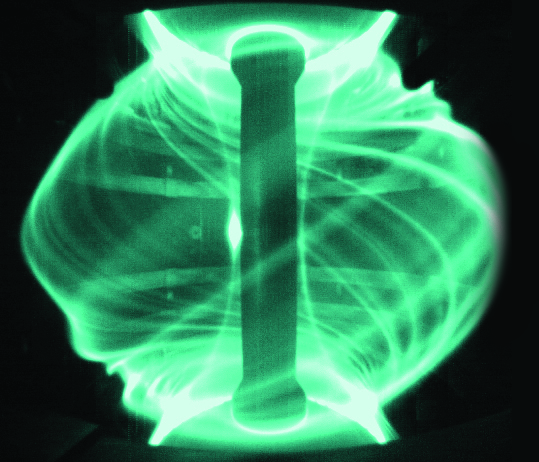 Edge localised modes, or ELMs, are a series of plasma eruptions that often occur at the edge of a tokamak plasma. They can result in extremely large heat loads on the exhaust structures of tokamaks and are a major concern for ITER. It is extremely important to understand ELMs and either identify the means to control them, or identify operating regimes where the energy release is small. Our research in this area is funded through a grant from EPSRC.

Our research spans the full range of scientific activity from analytical theory, through large scale numerical modelling on parallel computers, to experiments on the mega amp spherical tokamak (MAST) at Culham. Beginning with our theoretical work, we are aiming to improve the understanding of the early stages of the ELM using both ideal magneto-hydrodynamcs (MHD) and two-fluid MHD models of the plasma. In a collaboration with General Atomics (San Diego) we have developed the ELITE code, which is based on linear, ideal MHD. This code has proved very useful for understanding of the onset conditions for ELMs and may help us to identify regimes where small ELMs exist. We are beginning to explore the incorporation of two-fluid effects into ELITE. A non-linear analytic theory is also being developed in collaboration with the University of California, Los Angeles and Imperial College, London to shed light on the mechanism of the energy loss during an ELM event. We are particularly interested in the filamentary structures that erupt from the plasma surface, which our theory predicts.

We are also involved in large scale computational modelling of ELMs, working in collaboration with Lawrence Livermore National Laboratory in the US. The new computer code that we are developing will, we hope, tell us more about the non-linear evolution of the ELM and, in particular, how energy is lost during an ELM event. In collaboration with the University of Leeds, we are also exploring the possibility that ELMs may be related to solar eruptions, such as solar flares. The work is computationally intensive, and makes use of our departmental Beowulf cluster.

Finally, we are involved in experimental studies of ELMs, collaborating with UKAEA Culham to characterise filamentary structures that are observed in the MAST tokamak. There are three broad classes of filaments associated with (1) strong filaments during the ELMs, (2) weaker filaments between ELMs, and (3) filaments which are probably associated with turbulence at the plasma edge. The strong filaments observed during the ELMs are broadly consistent with those predicted by our theoretical modelling. However, there is still uncertainty regarding the cause of the other types of filamentary structures.

Because ELMs are such a concern for ITER, we are interested in learning how to control them and, in particular, limiting the energy released in each ELM event. One exciting new project that we are just starting to get involved with is to explore whether ELMs can be controlled using a series of coils positioned inside the MAST vacuum vessel. The idea here is to affect the pressure gradient at the edge of the plasma by perturbing the magnetic field there using the coils, and so influence the ELM characteristics. The technique, pioneered on the DIII-D tokamak in San Diego, has worked well on a number of tokamaks around the world, but little is understood about the processes involved. It is important to improve our understanding in order to assess whether this is a viable ELM control technique for ITER.