In December 2018 the first year Fusion CDT cohort spent two nights away at YHA Hathersage Hostel in the Peak District. The Fusion CDT strongly encourages students to work collaboratively throughout their PhDs, to give them an understanding of how their individual research can be relevant to other areas. This teambuilding trip was an opportunity for the new students to get to know each other better.

A committee of volunteers from the first year cohort planned the itinerary and budget for the trip. Extracts from the report written by the committee after the trip are below, along with some photos of the highlights:

“The aim was to strengthen the cohort, by communicating ideas, fostering teamwork and getting to know each other better; we certainly achieved all of those things. On the afternoon of day one the team arrived and had time for a quick jaunt around Hathersage before night fell. Suitably refreshed, we then began the group fusion-related activity.

The fusion group activity began with each of us summarising our PhD project. The challenge was to do so using only the 1,000 most common words in the English language. This was rather difficult, though it led to much interesting discussion and entertainment. We then pooled our collective expertise to plan a podcast……. We recorded a podcast-style discussion……. (this) helped our cohort bond and got people excited about podcasting!

After the group activity, we settled down for dinner and then an evening of team-building fun and games. Commendations go to Harry for winning the poker, and Michel for being very good at hiding in a lively game of sardines. Feeling like a much more bonded cohort, we retired for night.

Day two began early for some, with a fortifying trip to the local outdoor swimming pool in Hathersage. Despite the frosty conditions, it was agreed to have been a successful outing and we got a great view of the sun rising! The team then embarked on a hike to the nearby Stanage Edge, an inspiring and scenic ridge in the peak district. The walk provided plenty of opportunity for team-building chit-chat, in addition to group activities such as map-reading and spelling out words using people. Upon our return to the hostel, we set about preparations for the Christmas dinner. Turkeys were roasted; potatoes were mashed. Parsnips were glazed, wine was mulled, charades were played and eventually, like a large if slightly eccentric family, we sat down for dinner. After the meal, we sang some Christmas carols (we even got some German ones in!) There was then some more team-building fun and games, and we went to bed.

On day three we woke up, packed up and headed back to our homes. All in all, we had a good time and look forward to meeting up again in January!” 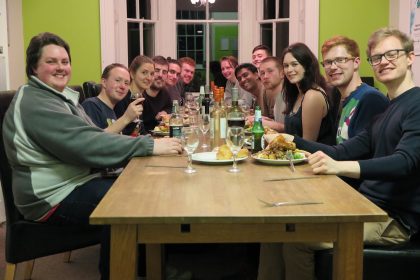 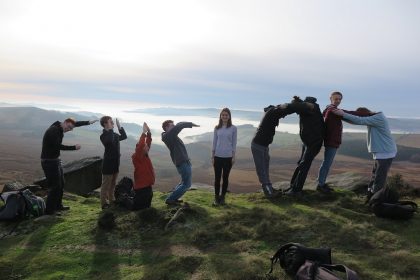 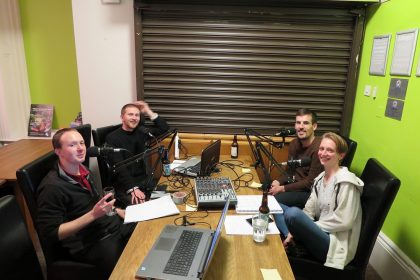 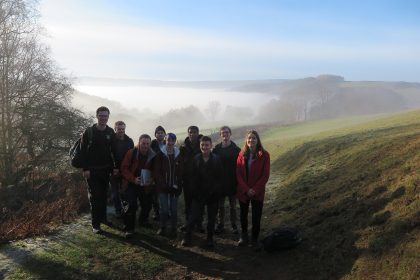