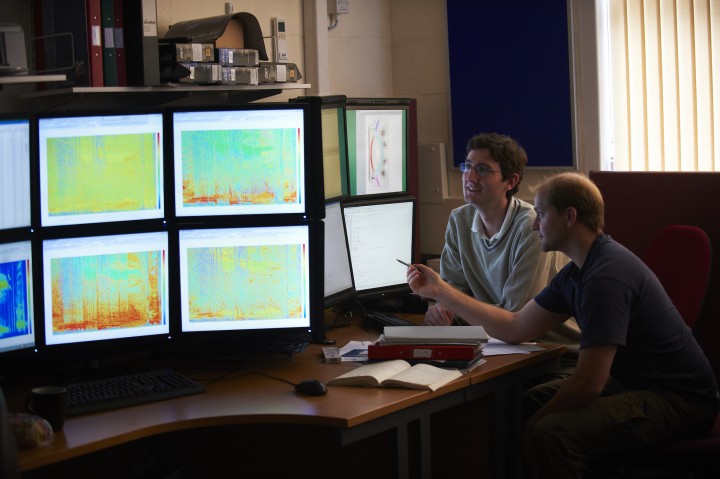 Fusion, whether by inertial confinement or magnetic confinement, requires deuterium and tritium to be heated to such high temperatures that the electrons are stripped from the ions. The resulting conducting gas is called a plasma. Plasmas are common-place around the universe so the topic of plasma physics is important in many branches of science including astrophysics and solar physics, as well as having industrial applications. The basic plasma physics principles will be introduced through a combination of physical pictures and mathematical analyses, often using examples from fusion to provide specific applications.

This module is taken by all Fusion CDT students with an additional series of lectures on Waves for Plasma students only.

Large fusion experiments typically utilise a wide range of sophisticated instrumentation to diagnose the plasma performance. The interpretation of the large volume of data (several gigabytes per plasma pulse) generated by such instruments is an important part of fusion research. The course will introduce the skills necessary to interpret a range of diagnostic measurements routinely used on large fusion facilities. Using a suite of specialist software tools, students will be able to gain experience of analysing real data from leading inertial and magnetic confinement devices. The course will make use of the remote tokamak control room at York and will serve as excellent training for longer project work based at large facilities (for example at Culham Centre for Fusion Energy or the Rutherford Appleton Laboratory).


A successful fusion reactor must confine the fusion fuel to maintain the thermonuclear reaction for sufficiently long that more energy is produced than was needed to start the reaction. The inertial confinement scheme involves the compression of tiny amounts (milligrams) of fuel to a thousand times solid density and uses the inertia of the fuel itself to provide the confinement. We will consider how inertial fusion may be achieved, and cover topics such as laser plasma interactions, dense plasmas, hydrodynamic implosion and instabilities, radiative energy transfer, nuclear fusion ignition and burn propagation. The students will be exposed to the most recent ideas and concepts in the field including hot spot, shock and particle-driven fast ignition.


Much of experimental fusion research is concerned with the development of “diagnostics” (measuring instruments) to provide information on key plasma parameters. We will introduce the basics of diagnostic systems used in fusion research, and will demonstrate how advances in diagnostic development have led to an increased understanding of many outstanding problems in plasma physics. The emphasis will be on the underlying physical principles of each diagnostic and how the complex interactions within fusion plasmas can be used to determine their fundamental properties. As well as describing the physical principles and the hardware required for a given measurement, we will also consider methods of the data analysis used for each technique. Case studies of state of the art diagnostics will be used to illustrate the fundamental principles and we will conclude by considering diagnostic developments that are necessary for next-step devices such as ITER.


Fusion reactors are complex installations which bring together a wide range of engineering disciplines. This course aims to provide an introduction to the basic optical engineering principles which underlie the design of diagnostics for burning fusion plasmas, together with the concepts of systems engineering and project management which underpin the successful completion of large engineering projects. The final part of the course will consider the methods used to interface the diagnostic systems to on-line or off-line computer systems. Where possible the course will be illustrated using examples from existing fusion devices to provide specific applications.

This is a one-week module, and will be taken by both CDT Plasma and Materials Strand students.


A key step in developing fusion as a viable source of electricity production is the development of reactor technologies to exploit the energy produced in burning plasmas. This complex subject encompasses a range of science and engineering disciplines, including materials science, physics, optical, electrical and mechanical engineering. Topics include materials damage and activation (which consider the effects of radiation on reactor materials and optics assemblies), tritium handling and breeding (including possible breeder blanket designs, advanced fuels, and strategies for controlling tritium retention within the reactor), inertial confinement driver technologies and target manufacturing processes, and auxiliary reactor components such as specialist heating systems for magnetic confinement fusion.

This module will be delivered by staff from the University of York, Central Laser Facility and Culham Centre for Fusion Energy.

This is a one-week module, and is taken by all CDT and MSc Fusion Energy students.


A tokamak is a device that confines a toroidal plasma using a magnetic field. This topic addresses the plasma physics specifically relevant to tokamaks and other toroidal confinement devices. Such a plasma needs to be stable, so we will study which waves can be excited in a plasma, which of them are likely to lead to instabilities, which of these can be tamed, and which determine performance-limiting boundaries. A fusion plasma needs to be hot, so the topics of current drive and heating will be covered. The heat, once injected into the plasma, needs to be kept there, so we will develop an understanding of how heat is transported around the plasma, as a consequence of both coherent modes and also turbulence. The particular challenges for ITER will be discussed.

The module seeks to extend student knowledge of low temperature and technological plasma with a view to equipping them for research in these areas.

The extended nature of the dominant Coulomb force between the particles in a plasma ensures that the behaviour is markedly different to that of gases where the forces are short range. As a result plasma has two distinct dynamic patterns associated with correlated long range motions – collective effects- and collisions. The module seeks to extend student knowledge in high energy density and laser plasma interactions with a view to equipping them for research in these areas.


The interaction of plasma with materials is a complex and important interdisciplinary topic with applications across a wide range of fusion and technological plasma research. For example, plasmas in contact with surfaces can erode materials, they can deposit materials, or they can change the surface chemistry of materials. In tokamaks, the interaction of the plasma with the material walls is often detrimental to the performance of the core plasma, and this is a very active and important area of fusion energy research. This module aims to provide an overview of the principles that govern the interaction between a plasma and a material surface. The course begins with a series of short lectures that describes the plasma boundary layer (known as the “sheath”) that is responsible for driving energetic particle fluxes to material surfaces. The basic chemical and physical processes that occur at the material boundary are then introduced with examples from fusion and technological applications. Finally, the surface analytical and microscopy techniques that can be used to characterize the material surface are described. Using the ideas developed in the lectures, the module continues with a series of short laboratory experiments to demonstrate the practical implementation of plasma-surface diagnostics, to observe the effect of plasma on a surface and, finally, to characterize the damage to material surfaces that can arise from plasma interactions.

This is a one-week module, and will be taken by both CDT Plasma and Materials Strand students.


This module will develop a number of key research skills such as planning a project, writing a proposal, executing a short, intensive project (to budget and time) and disseminating the results by a short letter-style paper and a conference-style talk. Students bid for in the region of £3,000 to fund their mini research project. A key element of the collaboratory project is that it should involve a collaboration, perhaps with another CDT student in the same cohort, but it could also be a collaboration with a different partner, including internationally. It is important that students design a project that broadens their skills beyond those that they will develop in their PhD research project. They should be adventurous in their research ideas in the planning stage, but have contingency plans if things go wrong.