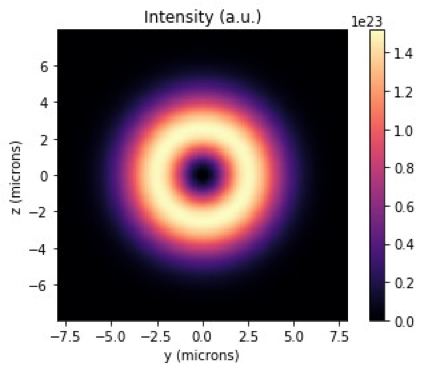 Inertial confinement fusion (ICF) is one of the two mainstream approaches to fusion energy (along with MCF) and involves compression of hydrogen to extreme temperatures and densities in order to drive nuclear fusion reactions to the point of ignition.  The most commonly studied approaches to ICF uses high intensity lasers to generate ablatively driven shocks on the surface of a fuel capsule to drive the compression.  The challenges associated with this process include driving symmetric implosions and driving the implosions such that the fuel is not heated prior to compression.  The system is susceptible to this ‘preheating’ if the laser-plasma energy coupling at the surface is not well-controlled, causing high energy electrons to be produced.  This heating can prevent the fuel from reaching the required density conditions for ignition.

The study of laser-plasma interactions is, therefore, vitally important to the success of ICF as control of the electron energy distribution will dictate the efficacy of the compression.

While high energy electrons (and the x-rays they generate) can cause deleterious effects on the compressibility of the fuel,  the particle acceleration process can also be used to generate useful sources.  In turn, such sources can be used to radiograph and diagnose the compression dynamics which are so important for successful inertial fusion.

This project will look at the coupling of laser energy into plasmas using novel geometry laser pulses described as Laguerre-Gaussian (L-G) beams.  The work will likely employ a laser wakefield accelerator (LWFA) geometry to study the motion of electrons in a collisionless plasma, and potentially extend this work to study how L-G beams deposit energy in solid density plasmas.

The project will be primarily experimental with experimental time being sought at the Central Laser Facility at the Rutherford Appleton Laboratory in Oxfordshire, as well as at facilities in Sweden and Romania.  The physics of the interaction will be simulated using the particle-in-cell (PIC) code EPOCH as well as alternative PIC codes which are more suited to the radially symmetry geometry of the focus of a L-G beam.

During the project, training in experimental laser-plasma physics will be completed through collaboration with the Central Laser Facility, as well as ‘on-experiment’ training at the various laser systems as well as in the York Plasma Institute laboratories.  The simulation work will primarily involve running pre-existing codes rather than writing new codes.  This means that while basic coding skills will be useful, advancing computational experience will not be required.  Communication of the work – through verbal and written means – is an important skill which will be built through a variety of training and practice sessions throughout the PhD.

Since most undergraduate programmes do not cover high intensity laser-plasma interactions during the degree, specific experience of the field is not required.  An enthusiasm for collaborative science and teamwork will be important for the successful candidate.

The project will mainly be based in York, but will involve experimental campaigns at high power laser labs which are almost always collaborative.  This might include travel to Oxfordshire, Sweden, France, Romania and the USA amongst other laboratories and universities.  There will also be the opportunity to attend summer schools and conferences internationally.