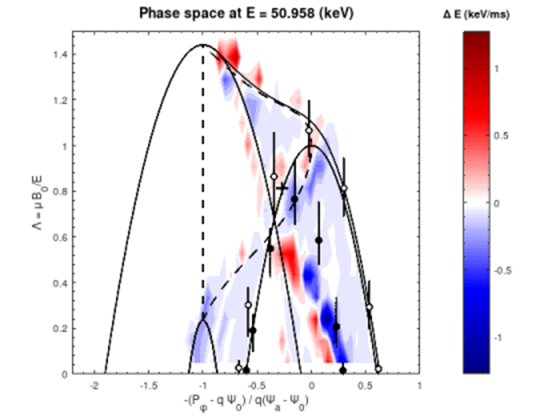 The interaction between FIs and MHD instabilities is an active and intense field of research Recent modelling developments include MHD and particle kinetics codes (with realistic description of the instabilities’ amplitude and spatial structure and full orbit calculations) such as HALO (developed at CCFE) and the reduced transport “kick-model” for TRANSP/NUBEAM (developed at PPPL). Of particular importance, especially for MAST Upgrade, is the modelling of the FIs full orbits for the validation of theoretical predictions of the interplay between FIs and MHD instabilities such as sawteeth, fishbones, toroidal Alfvén eigenmodes, long-lived modes and edge localized modes. The spatial structure and temporal evolution of these instabilities, at times non-linearly coupled to the dynamics of the FIs, is crucial for the correct prediction of the confinement of FIs.

The project is aimed at a systematic comparison of full-orbit and guiding-center reduced transport calculations with a set of fast ions experimental measurements on MAST Upgrade in presence of perturbations of the plasma equilibrium due to sawteeth, TEAs and fishbones. A particular focus will be dedicated to the modelling and interpretation of collimated neutron flux measurements using the upgraded neutron camera installed on MAST Upgrade and the comparison with other FI diagnostics (FILD, FIDA, compact NPA and charged fusion product detector). This is a modelling project for which good numerical computation skills are required. The research will be carried out mainly at Durham University with collaborations with CCFE (for HALO), the Princeton Plasma Physics Laboratory (for TRANSP/NUBEAM) and Aalto University (for ASCOT). As such, international travel and participation to international conference and workshops are foreseen.

The outcome of this project is a framework of reduced, rapid fast ion transport models that will be used to compare simulations and measurements probing different regions of the phase space thus providing an integrated understanding of the FIs dynamics. In turn, the outcome of this project will enable the development of operating scenarios where the effect of performance limiting distributions will be suppressed thus allowing improved FI confinement and non-inductive current drive. The main focus of this project is MAST Upgrade thanks to its on-axis/off-axis NB injection flexibility but the developed framework will be applicable to conventional tokamaks and will be of relevance to STEP, ITER and DEMO. 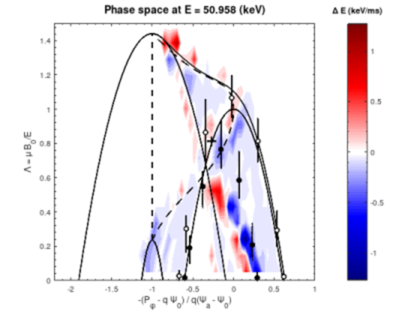 Image above: Orbit boundaries at t = 0.16 s for fast ions with energy of 50 keV and different pitches launched at R = 0.7 m (solid circles) and R = 1.0 m (open circles) compared with the corresponding energy kick probability probability density calculated by ORBIT in presence of a n = −1 and n = −2 TAE perturbations calculated by MISHKA.

The project will be mainly based at Durham but will require short stays at CCFE.