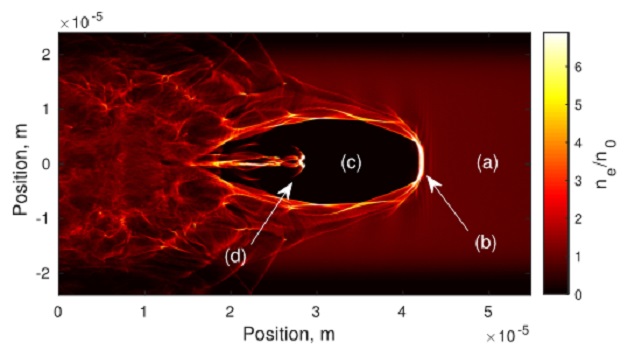 Inertial Confinement Fusion (ICF) research has developed over the last decade or two with significant improvements in neutron-yield driven by the increased understanding achieved through improved diagnosis of the implosion. These diagnostics include neutron and x-ray imaging which allows the symmetry of the implosion to be measured.

As well as symmetry, progress towards breakeven has been stalled due to mixing of hot and cold fuel resulting in a cooling of the core and a reduction in fusion rate. Imaging this mixing remains a challenge.

In the second half of the 20th Century laser-wakefield acceleration of electrons was developed in many ways a spin-off application from ICF. The quality of these compact accelerators has improved and recent work has illustrated its viability as an x-ray source for imaging. These x-rays may be produced from the betatron motion of the electrons, bremsstrahlung from a metal foil, or from the inverse Compton scattering (ICS) of a laser. ICS has the ability to produce spectrally controlled, hard x-rays from a micron-scale source making it ideal for imaging compressed fusion capsules.

The planning, simulation and design aspects of the project will be based at York.  The experimental data will be collected at experiments in Oxfordshire and other high-power laser facilities which will likely include international travel which could be for several weeks at a time.  Dissemination of information will be achieved through attendance at international conferences.

The student will gain project management and planning skills.  They will also learn how to run several simulation codes with applications in plasma physics, nuclear physics and medicine.  They will learn how to automate data collection and analysis which is considered a highly employable skill.