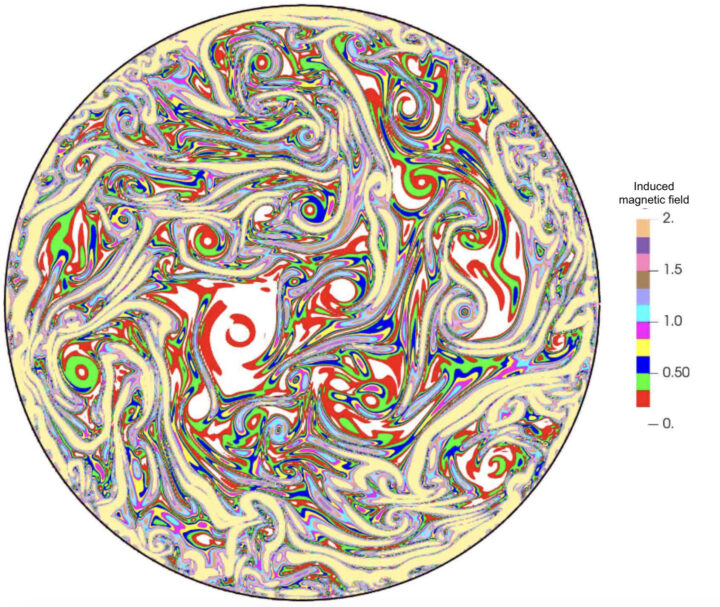 Plasma turbulence is a complex topic that involves the transport of ions and electrons. Turbulence in plasmas can lead to instabilities and disruptions, preventing long-time stable state operation of a magnetic confinement reactor. The understanding of fusion plasma turbulence close to the walls is an attractive research topic for both the industrial and academic sectors that involve the complex physical interaction of an electromagnetic field with the flow of a conductive fluid.

The dynamics of fusion plasma can be approximated within the context of magnetohydrodynamics (MHD) by the combined evolution of the fluid’s momentum and the magnetic field produced by the motion of the charges. Only very ideal cases – quite far from the realities of life- can be solved analytically. There is a plethora of different numerical modelling approaches to plasma flows, each addressing different points on the accuracy vs. computational cost spectrum. An appealing strategy offering a good balance between accuracy and computational cost is the “two-fluid” model, in which electron and ion fields are considered in an Eulerian framework, with coupling between the fields. These models capture the continuum scale phenomena in plasma turbulence well, and employ MHD (Navier-Stokes equations coupled with Maxwell’s equations) to capture the influence of the electromagnetic field on the plasma flow.

The core of existing methods is code coupling between an electromagnetic solver and a fluid mechanics solver. However, such options are not optimal. The electromagnetic solver, which is typically not designed for this type of coupling at the origin, frequently fails to properly account for the fluid’s influence, and the boundary conditions are frequently handled incorrectly. There is opportunity in this scenario for a new integrated simulation tool. With the final objective of being able to develop such a tool, our research project aims to progress in the modelling of the flows of conductive fluids (e.g., fusion plasmas) by the lattice Boltzmann method (LBM). To our knowledge, the use of two-fluid models in LBM is entirely novel, despite the significant potential of the method (as highlighted below).

The LBM is situated at a mesoscopic scale, taking more closely into account the dynamics of plasma, as opposed to standard modelling approaches, which solve fluid dynamics at the macroscopic scale. In a nutshell, the lattice Boltzmann approach is based on the notion that dynamics can be represented by extremely basic local laws of interaction (collision) and transport of populations of particles on a discrete lattice. The LBM has seen increasing success in several areas of fluid mechanics since the 1990s began. In fact, the LBM has been advocated as a persuasive alternative to traditional modelling schemes because of the algorithm’s inherent simplicity and its capacity to simulate physical processes on small scales. Massively parallel simulations are a good fit for this approach. By carefully separating the behaviour and interactions of the medium constituents (ions, electrons), this approach is particularly pertinent for modelling plasmas in our setting. Theoretical research that has already been published demonstrate that it is feasible to simulate the fusion plasma dynamics in an integrated manner (i.e., without code coupling). The boundary conditions for the electromagnetic field and the velocity field, which are crucial in industrial settings, will be given special consideration. Due to the dearth of generalised literature on multi-species modelling for plasmas, our project will face significant difficulties in this area. Numerical simulation by LBM is a transversal research axis at MACE. This new research project will allow us to advance our skills on the lattice Boltzmann method, by exploring a new field of application. In the longer term, our modelling strategy will make it possible to approach configurations close to real problems, and thus meet industrial needs.

We will provide training in scientific writing and presentation. The student will develop skills in software development, scientific computing, communication and critical thinking.

We anticipate co-supervision and visits with members of UKAEA.