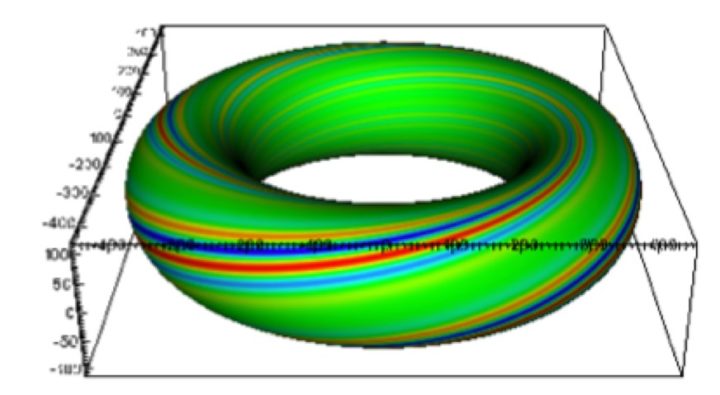 Ideal magnetohydrodynamics provides a theory for predicting the stability of tokamak plasmas to both large scale and intermediate scale perturbations. The former determines the pressure limit of a tokamak – a key parameter  for fusion performance – while the latter determines the onset of violent plasma eruptions called Edge-Localised Modes, or ELMs. ELMs will cause excessive erosion on next step tokamaks, such as ITER or STEP, and therefore must be controlled or avoided. One approach to control ELMs is to apply 3D magnetic perturbations. The ELITE code is an ongoing collaboration between University of York and General Atomics. We have recently extended it using an efficient formulation to calculate (i) the plasma response to 3D magnetic field perturbations, and (ii) the stability of the resulting 3D equilibrium (see figure). This new PhD project will aim to: (i) benchmark the new 3D ELITE code against other approaches; (ii) exploit the new code to develop a physics understanding of how 3D effects influence ELMs and the structure of the edge (pedestal) plasma region; (iii) extend the physics model via the so-called delta-prime approach to include non-ideal effects (e.g. plasma resistivity); (iv) explore the effects of a conducting wall around the plasma, and (v) explore the consequences for equilibria characteristic of the STEP and ITER plasmas. An extension could include analytic theory to understand how MHD modes influence plasma flow, and the consequences of this for ELM models.

The student will be based at University of York, with opportunities for extended research visits to Culham Science Centre and overseas collaborations.

This project is offered by University of York. For further information please contact Howard Wilson (howard.wilson@york.ac.uk).