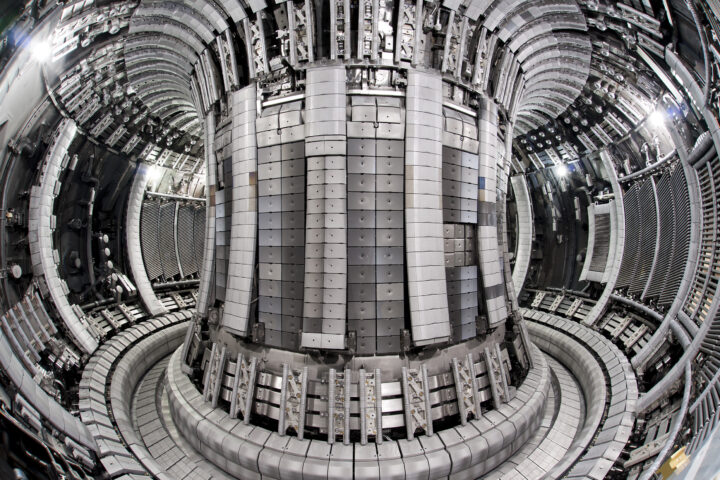 On Saturday 8th April Fusion, more than 3000 visitors comprising a range of ages descended on the York Barbican for the 2020 University of York “YorNight” event. Fusion CDT staff and students, as well as a range of other faculties and research groups, were in attendance to communicate some of the science being undertaken across the University. A range of interactive demonstrations, including an infrared camera to demonstrate temperature measurements, laser to demonstrate plasma heating mechanisms, plasma ball to visualise plasma-surface confinement and snooker table to show the principles of ballistic neutron damage, were displayed by our fusion researchers to enthuse an audience of largely school children with the possibilities for our exciting field. 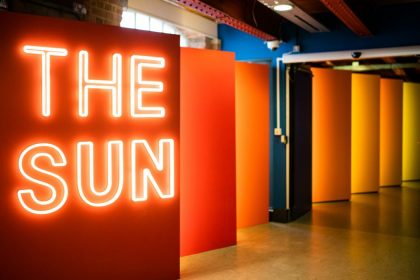 Join our researchers as they shed light on fusion energy and how it powers the Sun. Can we make mini suns here on Earth? Will they eventually fuel our power stations? Could fusion solve the energy crisis? Come along to find out.

The CDT researchers will be exhibiting the Sundome and other fusion related demonstrations at the Late Sun event at the Museum of Science and Industry on Wednesday 27 November 2019.

Our researchers will be attending the Celebrate Science event at Durham University on the 30 and 31 October 2019. They will be using the Sundome to promote our research into fusion, as well as exhibiting a number of activities that support the materials and plasma research that is implemented at our universities, in our goal to create a Sun on Earth.

Please do pop along to our stand and speak to the researchers. 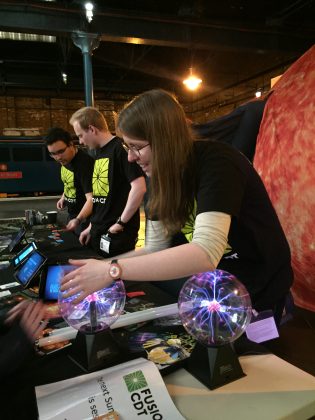 Our researchers will be exhibiting the Sundome on Wednesday 27 February at the National Railway Museum, York from 10:30 am – 16:00 in the Station Hall.  Come inside our Sundome! Join scientists on an exploration of the power of the Sun and fusion energy. Can we make mini suns here on Earth and will these eventually power our power stations? Will fusion one day solve the energy crisis? Come along to find out!

CDT Researchers will once again be supporting the annual Durham University – Celebrate Science event. Visitors will be able to visit the Sundome and find out more about the fusion research that our researchers are conducting through a variety of demonstrations and interactive activities. 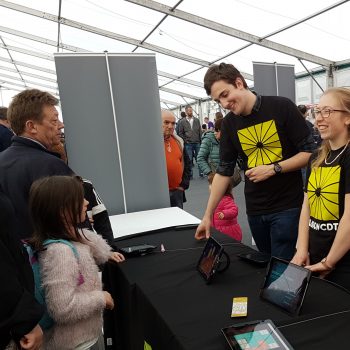 Join our researchers inside the Sundome and discover fusion energy! Let us show you world-leading UK facilities and learn more from scientists at the cutting-edge about how we build a Sun on Earth and what we’ve learned along the way!

Continue the journey of discovery with researchers from the York Plasma Institute and the Fusion Centre for Doctoral Training. Find out more about their path to discovery with our demonstrations of plasmas in action ‘The Lightning bolt’ and ‘Plasma jet’; take a look inside our Lego[TM] fusion reactor; learn about the key role of materials science in creating the Sun’s container at our pool table and amazing magnetics with the levitating superconductivity track. See how plasmas are used in everyday life: from plasma TVs to spacecraft propulsion.

Take away a souvenir from your visit and relive your trip to the home of the Sun on Earth with your friends and family… Don’t forget to speak to our podcast team and tell us what you’ve discovered so we remember it too!

The Nuclear Masterclass is an annual event hosted and organised by the Physics department outreach team, from Monday 22 June until Friday 31 July 2020.

It is a four week programme, suitable for pupils studying Physics from years 11 through to 13, offering pupils 3 – 5 hours of content per week. The programme consists of live webinars with leading experts and Q&A webinars throughout the week supported by students.

The event was very successful with 1000 pupils registering for the programme and approximately 500 people tuning into the Fusion CDT webinars.

We would like to thank all the students and staff for their contribution to an event that made such a difference to pupils lives. These are youngsters who should have been preparing for their GCSEs and A-levels this summer, their whole focus for the past 3 – 5 years forced to a halt as their exams were cancelled and schools were closed. This programme will have been a life saver to some giving them some focus and allowing them to continue the learning that they were missing.

The outreach department are planning to host a similar event in the winter months and again next summer, keep an eye out for the emails looking for volunteers closer to the time if you would like to get involved. 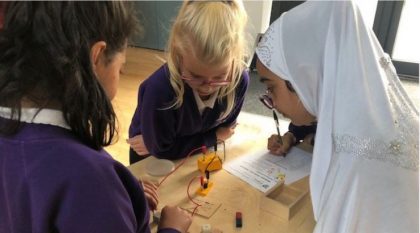 “The event was a huge success, and really inspired a lot of the children. They gained a lot from it and really enjoyed the workshops – they still talk about them now!”

Museum of Science and Industry (Manchester) 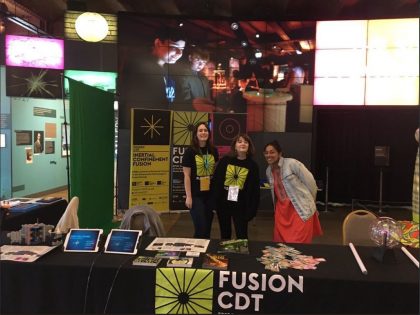 The Sun event was an extremely enjoyable experience for all those involved. The CDT had a wide range of activities available for the public to take part in and had a really positive response. The stand attracted a wide range of people and there was a massive buzz around fusion energy. The younger attendees loved the hands on activities, especially the plasma balls and there were also a lot of really interesting discussions about the challenges and current progress of fusion energy!

On Saturday 17 November, volunteers from the  CDT and York Plasma Institute,  supported YorNight 2018 at Kings Manor. YorNight is an opportunity for the public to spend time with researchers from the University of York and find out more about the research that they do. Each research group offered fun activities and demos to demonstrate their research to people of all ages.

This event was supported by CDT students from the University of York (Caroline Lumsdon, Emma Hume, Lucy Holland, Michael Mo, Leo Doehl, Fabio Federici, Will Trickey, Emmeline Douglas Mann, Joe Branson, Hasan Muhammed & Eduardo Solis Meza), Durham University (Alex Blair) and the University of Manchester (Paul Barron). Oxford University were unable to attend but ensured that we received a materials demo for the event. We are grateful that we received so  much support from so many of the partner universities as it meant that we were able to offer demonstrations for Low temperature plasmas, materials and plasma strands. We also had a volunteer from the York Plasma Institute (Stuart Morris) and a University of Manchester undergraduate (Olivia McLatchie), who is interested in joining the CDT and wanted to find out more about our activities. In addition CDT supervisors Kate Lancaster and Chris Murphy also volunteered to support the event.

We were able to provide a large number of fun activities owing to the numbers of volunteers, these activities include a visit to  the Sundome to watch our award winning video, a Green Screen to have a photograph taken as memory of the event, the popamatic, the lightening bolt, a superconductivity track, a Lego Tokamak designed and built by Tom Nicholas (3rd year CDT), a Tokamak instability demo and a materials pool! 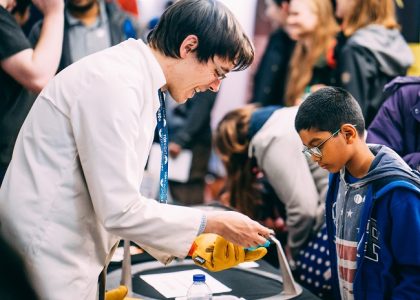 This year over 5,000 people visited the ‘Celebrate Science’ marquee, interacting with over 200 University staff and student volunteers from ten departments. 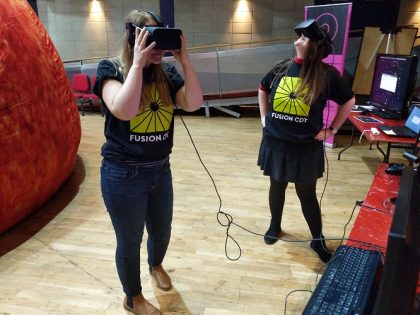 As part of the global Fun Palaces weekend event, Sam, Charlie, Will, Caroline and Kate took the sundome, fusion and space themed activities to the ARC Arts Centre in Stockton on Tees. Fun Palaces is a campaign for promoting community at the heart of culture, with an annual weekend of action created by, for and with local people. The children especially enjoyed popping balloons with lasers and flying through a virtual reality simulated universe! 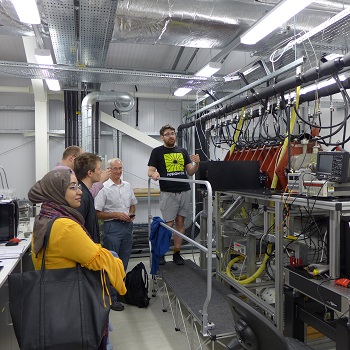 On the 6th and 13th June 2018, the York Plasma Institute Laboratories hosted tours. In total there were four tours over the two days, each tour consisting of between 4 and 9 members of the general public.
The tours commenced with a welcome and insight into the research that the York Plasma Institute conducts and was followed by a tour of the Tokamak control room and a visit to the YPI labs. We would like to thank all the PhDs, Postdocs and Academics that were involved – Prof Greg Tallents, Dr Ben Dudson, Dr Deborah O’Connell, Dr Wei – Li Fan, Dr Sandra Schoeter, Dr Peter Hill, Andrew Malcolm-Neale, Bhavin Patel, Christopher Underwood, Joshua Boothroyd, David Shaw, Scott Doyle, Sarah Wilson, Joe Branson, Helen Davis, David Meehan, Scott Jackson, James Ellis, Michael Mo and Eduardo Solis Meza.

We saw another excellent turnout at this year’s Stargazing Live event held at St Peter’s and St Olave’s schools in York. Stands were set up with information about the Fusion CDT, cosmic rays and infrared radiation. Talks given in the Sundome and Cosmodome proved extremely popular with all ages and the Binding Blocks construction activity provided the public with a visual representation of fusion physics, nuclear stability and radioactive decay.  The evening concluded with a fascinating talk by Dr Pete Edwards, who took the public on a whirlwind tour of astrophysical phenomena. He used extraordinary animations to explain difficult concepts like the Doppler Effect, atomic spectra and cosmic expansion – emphasizing how these ideas have helped scientists to develop an accurate picture of the evolution of our universe.

“At the Stargazing event at St. Olave’s, I helped with the setting up of the Sun Dome and Binding Blocks activities that took place before the main show. It was very encouraging to see all the visitors that attended having a genuine interest in the physics of fusion energy, and it was enjoyable relaying the information I learned from my taught courses to the general public and future scientists.” 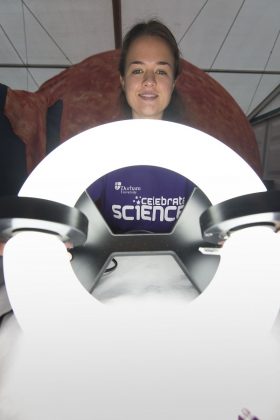 On the 25th and 26th October the University of Durham hosted Celebrate Science. This is an annual science festival attracting thousands of school children, primarily 7 – 11 year olds. It is an event organised to encourage children to get involved with science through all sorts of fun interactive activities.

Paul Branch and Alex Blair (University of Durham CDT students), organised for the Sundome to attend the festival, to promote the research of the CDT programme. They were joined by a number of CDT students from our partner Universities, who had volunteered to help support the Sundome.

It was a fantastic two days, Paul and Alex were pleased to confirm that it was the best year yet! Pre-bookings were taken for groups of up to 20, for regular slots to visit the Sundome throughout the two days. The bookings confirm that there were just short of 800 people through the doors of the Sundome, which must be a record! The activities and marketing materials outside the Dome meant there was always crowd.