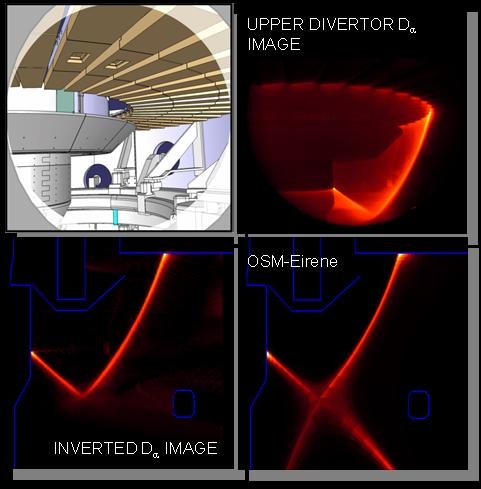 Research in scrape-off-layer (SOL) and divertor physics is concerned with studies of the edge region of the tokamak plasma where the poloidal magnetic field is “diverted” such that the plasma comes into contact with a region specifically designed to withstand intense plasma-surface interactions.

We are involved in a range of experimental studies (on the MAST tokamak and the forthcoming upgrade of MAST) to investigate ways in which the steady-state and transient heat fluxes to plasma facing components (PFCs) in the divertor can be reduced to acceptable levels.

One way in which to reduce the flux of heat and particles on to PFCs is to operate the tokamak in a “detached” scenario, a regime characterised by strong pressure gradients along the magnetic field of the SOL and where volume recombination can dominate particle losses. On MAST, our previous studies have focussed on comparisons between spectroscopic imaging diagnostics (DIVCAM) and interpretive onion-skin-method (OSM) models of the SOL. DIVCAM (short for DIVertor CAMera) allows the spectral emission of a large region of the divertor to be imaged at two different wavelengths. DIVCAM results are compared with predicted emission profiles derived from the OSM plasma model coupled to the EIRENE Monte Carlo kinetic neutral transport code. Work is currently under way to develop models of detachment and detachment stability in so-called “Super-X” divertor configurations, a major focus of MAST Upgrade.